Kathy, LaRhodia, Andy and Robert capture memories through photography.
I took these photos at various times during 2004-2008.

“There are always two people in every picture: the photographer and the viewer.”  — Ansel Adams

Looking through family snapshots, it’s usually pretty easy to tell who took the pictures.  It’s the person who isn’t in many of them.  With the advent of “selfies” it’s changing somewhat, but generally speaking, photographers don’t spend much time in front of the lens.

Maybe that’s why I like to take pictures of people taking pictures.  I have something in common with people who love cameras, and I enjoy catching them in the act of saving memories for themselves and other people to enjoy.

Are you the photographer in your family?  If not, try making some photos of the person who is normally behind the camera rather than in front of it.  If you can manage to take a picture of him or her taking pictures, so much the better.  It’s a nice way to round out the story in a collection of photos; a nod to the unseen storyteller whose presence, though seldom seen, is always felt. 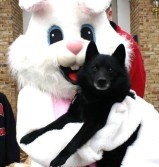