One surge at a time

“The waves rolling in from the Atlantic today were high and white and threatening.  Then, later in the day, the ocean was suddenly very quiet again, very much itself and at peace with the world. I couldn’t help thinking what a life lesson there is in that kind of undulation, in that kind of natural upset…peace is not a state of lifelessness…Peace is what comes to us after we negotiate the roiling, pounding waves of life lived one surge at a time.” — Joan Chittister

When the stormy times hit, one of the best emotional survival strategies I’ve learned over the years is to focus on a mental picture of riding the waves as they rise and fall, concentrating on keeping my head above water and avoiding over-reaction or panic.

It’s a sensation I experienced during my college years when I foolishly agreed to try body surfing with friends at Jones Beach, New York, the morning after a hurricane.  I have no idea why a lousy swimmer such as I would go into rough waters. I suppose I felt safer because two of our group were lifeguards who were off duty.  Good thing, too; it took me no time at all to get into trouble out there.

When the guys noticed I was floundering, they swam alongside me, one on each side, and held my upper arms, coaching me through every wave until we got back to shore.  I was freaking out at first, but they would warn me as a wave approached, and reassure me as they held fast to me, lifting me up and and helping me stay with it while it passed. By the time I was safely on dry land I had learned a few things, one of which was a healthy respect for the power of high waves.

I don’t think I’d ever intentionally put myself in that position again, but I have thought of that day many times as an analogy for the psychological aspects of the most harrowing moments of my life.  When such moments come, I try to focus on staying as calm as I can while I wait for the worst of it to pass, as it inevitably will.

Yes, usually there will be more waves to deal with, “high and white and threatening,” but Sister Joan wisely reminds us that we can– and must– negotiate those waves one surge at a time. And often, we will find the saving grace of support from friends who will ride the waves with us, showing us how to survive the storms.

Today, if you are in one of those blissful states of calm between waves, enjoy it! Relish the lack of pressure and the refreshing sound of silence.  But if you are riding a huge and frightening wave, take heart; it will pass.  I wish you the life-saving presence of many who care: folks who will lift your spirits with warm words, kind deeds and fervent prayers. Remember you’re not alone out here. 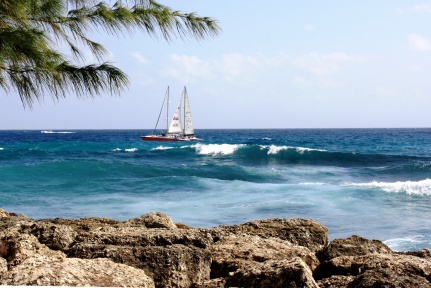